Home
Blog
Evidence Based Medicine
What Are The Pros & Cons of Network Meta-Analysis (NMA)?

What Are The Pros & Cons of Network Meta-Analysis (NMA)? 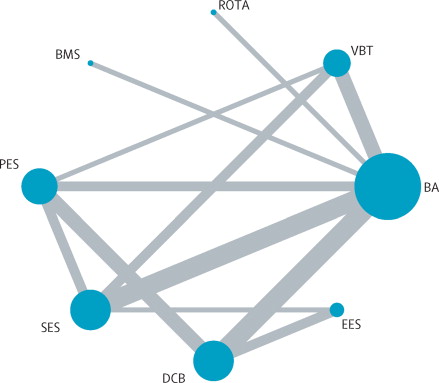 Evidence-based medicine (EBM) is gaining wide acceptance from researchers globally as it thoroughly optimizes the latest available evidence to make informed care decisions. This involves evaluating the quality of the clinical data by critically assessing methodologies reported in publications. Moreover, EBM incorporates both clinical expertise as well as patient values. Meta-analyses of RCTs often make it among the top of the evidence hierarchy, since it’s regarded as the most valid clinical proof. Indeed, meta-analysis is a validated method to analyse and summarize knowledge by increasing the number of patients, and thus also the effective statistical power. However, there are several limitations associated with meta-analysis, which considers only pairwise comparisons. Unfortunately, head-to-head comparisons are not always available in the literature or they fail to answer a specific clinical question. This can be overcome with the help of network meta-analysis (NMA), which helps providing a global estimate of efficacy or safety of numerous experimental treatments that have not before been directly compared with adequate precision, or at all. Network meta-analysis integrates both direct and indirect effects from the entire set of evidence. Additionally, it ranks the treatments as the best or worst on the basis of valid statistical inference methods. (1)

Network meta-analysis is preferable over conventional pair-wise meta-analysis, since it uses indirect evidence to justify comparisons amongst all treatments, thus enabling estimation of comparative effects that have not been investigated as precisely in RCTs. Thus, NMA is increasingly getting popular with clinicians, guideline developers, and HTA agencies as the ever growing new evidence needs to be placed in the context of all available evidence for appraisals. (2)

Furthermore, NMA is increasingly becoming essential to formulating recommendations on reimbursements as well as clinical guidelines by healthcare agencies around the world. It has recently been adopted by Cochrane, as 10% (23/230) of their systematic reviews since the year 2015 have used NMA. In 2015, GRADE working groups published guidance on using GRADE in conjunction with NMA. Furthermore, the National Institute for Health and Clinical Excellence (NICE, UK) also approves the application of NMA within its clinical guidelines manual. (3)

In addition, the ability of NMA to quantitatively assess interventions that have not been directly compared in studies aids the process of developing guidelines. This is because, in the absence of head-to-head evidence, guideline development groups will bank more strongly on expert opinion. Also, collective analysis of both direct and indirect evidence strengthens the evidence base. Moreover, while NMA determines the comparative effectiveness of drugs, the approach can be applied more broadly. For instance, the latest revision of the WHO HIV guidelines represents how the use of NMA to evaluate interventions in improving adherence to ART significantly contributed in the formulation of recommendations. (4)

Although NMA is a powerful tool for comparative effectiveness research, it is more complex than pair-wise meta-analysis. Also, the assumption of transitivity is stringent, which is essential to consider throughout the entire process of NMA. Supplementary analyses like network meta-regression are often necessary, which further increase the complexity of the analysis. What’s more, NMA is very resource-demanding. As NMAs generally cater to broader questions, they usually involve more studies at each step of the systematic review, right from screening to analysis, than conventional meta-analysis. Therefore, it is crucial to schedule the time and resource commitment before actually conducting an NMA. (5)

Network meta-analysis allows for indirect comparisons, incorporating more data in the analysis, thus tackling the bigger picture; while a single pairwise meta-analysis offers a fragmented picture. However, NMA should be done carefully. There needs to be a clinical question developed with input from both a subject area clinical expert and a statistician. Assessments of transitivity and consistency are fundamental for ensuring the validity of NMA. Finally, as mentioned earlier, the time and resource commitments required to produce a high-quality NMA should be appropriately taken into consideration. (5)

An Overview Of Evidence Maps

EBM and HTA for Healthcare Decision Making – The Time has Come!